BUENOS DIAS, SENORA KRUGER
or
HOW THE BOERS TAMED PATAGONIA
by

Spent Christmas among the Patagonian Boers in 1978
and
recorded the stories of the Old-Timers:

Around 1902, when the Anglo-Boer War as nearing its close and people's futures were being decided for them, a rickety old ship the "Highland Fling" sailed from Table Bay harbour.

On board the unreliable vessel were a number of Afrikaans families, leaving the country that they had loved and fought for, bound for South America - destination uncertain, fate unpredictable. (The Highland Fling ran aground on Jan 7 1907 near Falmouth. A photo of the stranded ship) 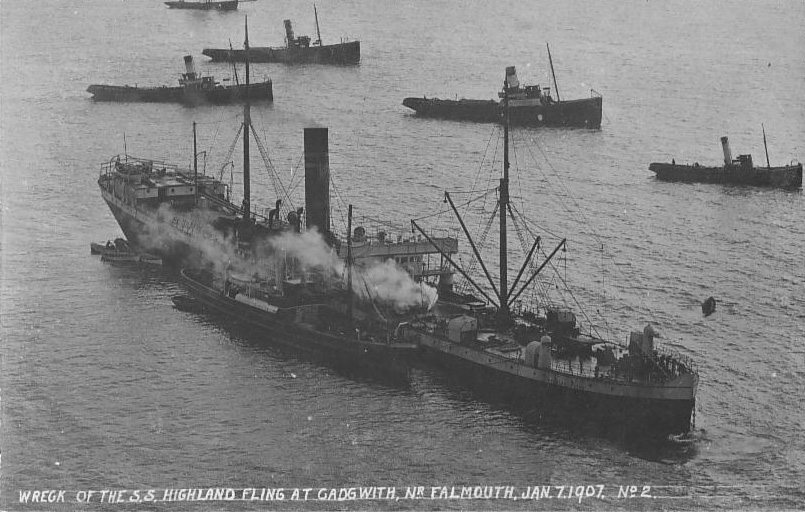 It was perhaps a wise move.  There will always be a little corner of the earth called Plekkie in die Son.

The brave families settled in Patagonia, the harsh, inhospitable region of Argentina, and established what is today a thriving community, where the traditions of the Old Country are upheld, and the language of the pioneers is still spoken.

The colony started as a tentative camp on the turbulent Patagonian seashore, 75 years ago.  This was an area that even the Spanish Conquestadores had left well alone,  peopled by roving outlaws and bandits, a few of the remaining Indios from the hostile tribes that had been vanquished.   It was an uneasy setting for a new colony.

Old Maria Magdalena Kruger, now more than 83, remembers fleeing South Africa and at the age of 10 arriving at what certainly wasn't the promised land: "We landed on the 5th of December, on this desolate, barren coastline.  We were told: 'This is it'.   There was nothing here then; just a little lean-to called a store.  We lived in tents for quite a long time and later we built huts.

"The men went out to stake claim on the land, and so we lived for many years - taming the wild countryside and making a life.  Some of the families went north to the Welsh colonies of Rawson, Trelew and Port Madryn to hire sheep and rams from the Welsh colonists.  The Welsh had arrived some 20 years before us, when the industrial revolution left many villages at starvation level.

"Some of us later trekked to Rio Chico and Rio Negro….In fact, some Boers trekked as far as the Andes Cordillera backbone and there established some of their own place names.  For example:

"We built our own harbour as well, Puerto Visser.  But now there is only a little shack left to remind us of the earlier pioneering ways.  And some relics in the sand. There you can still find fragments of glass bottles from the Boers' first bottle store."

It is not surprising that the Afrikaners had made good in Patagonia.  It took a certain type of person, especially in 1902, not to have been broken by the South African War, and who still had enough determination - and dignity - to set out to find a pleasant life.

That was 75 years ago.  Originally, 300 Afrikaans families have helped settle the region and opened up the outback.

The Argentinians themselves know as little as the South African do about this enclave of Afrikanerdom.  The founding 300 families have multiplied to about 4000 descendents.  They live mainly around Comodoro Rivadavia and Sarmiento, minding their own business, tending their pastures and their flocks of prize Australian Merino sheep that have made the region famous for its wool export. 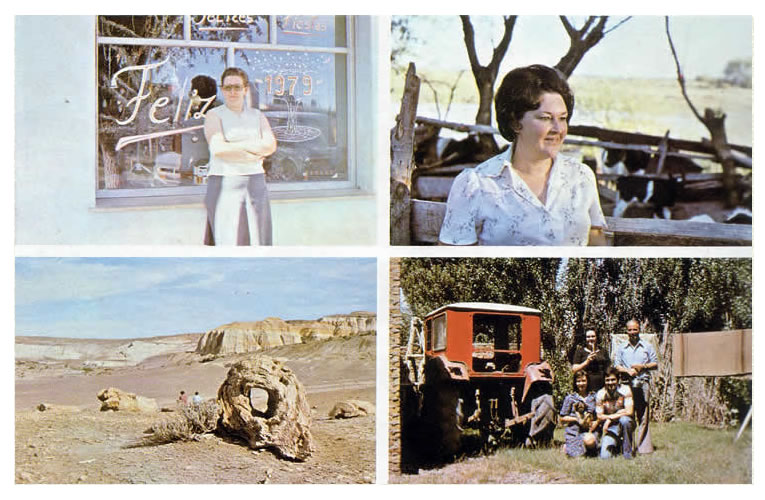 Further inland, in the less barren pockets of the Patagonian semi-dessert (which resembles the Karoo landscape) other families have turned to small-holding and vegetable farming, keeping just enough cattle for their own local needs.

In the small town of Sarmiento live 14 Afrikaans families.  This town is reached by a 3-hour bus ride from Comodore Rivadavia, across some of the richest oilfields of Argentina.

Here Dr Castrogiovanni, head of the state Institute of Agricultural praised the Boer efficiency in farming, and explained how, through sheer industry and application, they have become the most prosperous farmers of the region.

The leading personalities here are the Vissers - the local 'first' family. Pedro (Pieter) Blackie), who is curiously described as the heart and soul of Afrikanerdom, married a wealthy Afrikaans widow and now runs a small café-cum-guest house.  Then there is Senora Venter, who owns the local grocery store, selling whatever few greens the region can grudgingly produce - but plenty of canned foods.

In Comodoro Rivadavia, on Sundays, the weekly service is held at the Nederduits Gereformeerde Kerk, to a full and attentive congregation.  Following solemn preaching and praying (which were still in Afrikaans until a couple of years ago, but now in Spanish) comes the Braaivleis, here called 'Asado', at the house of Luis (Louis) Trichardt and his wife Wilhelmina.  Luis brings out his engraved and embossed silver dagger Gaucho-style to carve up the Sunday lamb.

These decorative daggers are worn nowadays more for decoration and prestige than protection. In the case of Luis, these daggers are the trophy-prizes he has been awarded for the quality of his Merino wool, his stud rams, or for his skill as a horseman…..besides these ornate daggers come in useful for braai-carving and bundu-bashing.

Another Indian and Gaucho habit (Gauchos are Argentine cowboys) picked up by the Boers is the inclination to sip boiling hot and bitter Mate herb tea, which, unlike Rooibos, is meant to stimulate the mind and body.

Luis Trichardt's ranch was ideal, his hospitality warm, the cherries just ripe enough for the picking, his horses frisky, and wife Mina's cooking was egte Boerekos.

Dr. Paul Coppa, regional head of INTA (Institute of National Technology for Agriculture), says of Luis: "He's our most prominent producer," which make Luis look bashfully to the ground and change the subject to when he was young, some 30 years ago.

"We rode to each others farms, girls too, and danced all night till dawn.  Then back on our horses after a hearty breakfast, to ride home again.  Distance was no obstacle - we rode for hours for a good get-together or a farm dance. We rode through wind, rain and snow."  These pioneering children certainly didn't miss out of fun.

Most of the Boer descendents are bi-lingual, speaking fluent Spanish from the schoolroom and Afrikaans from home.  The better educated and wealthier families also speak surprisingly good English, but one only find that out after several days, while they evaluate you - the outsider - allowing you to struggle valiantly through poor Afrikaans, Dutch and Spanish, pretending not to understand a word of English..

After several days, when they broke out into excellent English, I asked why I had been left to struggle all these days.  They laughed as they said: "We were trying to establish your credentials.  We wanted to know if you were genuinely interested in us, or just a passing traveller who looks on us as curios and relics of a bye-a-gone age."

Then, with all modesty I was told that this is their 'school' English.  Once the Boers started to prosper, their children were packed off to - English - private boarding schools in Buenos Aires, which were deemed to provide better education than the local state provincial schools.  And in the good old days when wool prices were still high (before the advent of synthetics), girls were sent to finishing schools in Switzerland and Germany, while the boys were sent to study agriculture in European institutes and universities.

And yet the culture hasn't changed much in the family home in Patagonia.  It's still Sunday church services, tea with Tannie Mina, singing Sarie Marais around the bonfires,  braaing whole lambs - and, of course, the Boers' deep love for their land - their new land, their own land.

I owe gratitude for the opportunity to visit and live among the Boers to Aerolineas Argentinas' South African director Dr. Carlos Sosa, Optar's Angel Mercado and Carlos la Ruffa, and most of all to Dr Raul Coppa of INTA (Institute of National Technology Agriculture) and his oil-exploration geologist wife, who kindly invited me into their Sarmiento home and introduced me to the Boer farming community.  All these were the good people who guided me in the right direction, when I asked "Can you help me find the Boers in Patagonia?"

I flew from Buenos Aires to Commodoro Rivadavia, where I visited INTA that put me on the road to the Boer farmers.