Sarmiento was born as a colony of immigrants, mainly from Wales. In the early 1900s it also experienced an influx of immigrants from Lithuania.

In 1900, Argentine authority was locally established when the Swedish former sailor Oscar Lundqwist, who had been appointed police commissioner to Sarmiento, set up the first "comisaría" ever in Sarmiento. It was situated next to "Las Tres Casas" where the Jones families from Wales and the Briton Pryce lived.

In 1903, 600 Afrikaner families arrived in Argentina following the defeat in the Second Boer War. They settled in the region as it had access to water unlike the coastal city of Comodoro Rivadavia where they first settled. The descendants of these colonists make up a large portion of the population of Sarmiento and still speak Afrikaans and attend the Nederduitse Gereformeerde Kerk ("Dutch Reformed Church") to this day. As recently as the 1960s Afrikaans was the most commonly spoken language however this has changed as the town's Afrikaans population has become more assimilated into Argentinian culture and society.

In 2016, an important fossil dinosaur was discovered near the town. It is named Sarmientosaurus musacchio in honor of the town and of the late Dr. Eduardo Musacchio, a paleontologist and professor at the National University of Patagonia San Juan Bosco. (Wikipedia : https://en.wikipedia.org/wiki/Sarmiento,_Chubut - accessed on 22 July 2018)

On 22 August 1965 the Sunday Times published the following story on Patagonia's Boers that "tamed a rugged and barren land" written by Peter Schirmer.

Click here for another visit to the Argentinian South Africans written by Vera Beljakova who Spent Christmas among the Patagonian Boers in 1978 and recorded the stories of the Old-Timers:

The Boers that Tamed a Rugged and Barren Land

"On a cold, rain swept day at the end of April, 1903, the Steamer S.S. Highland King rounded the Cabo dos Bahias, 46 degrees south of the Equator, and anchored in the northern-most bay of the Gulf of San Jorge.

From her rust-streaked decks a group of 138 "Bittereinders" - Boers who had refused to remain in South Africa under the British flag following their defeat in the South African War - gazed across the wind-tossed water at a bleak stretch of land.

A thin strip of shingle beach was bisected by a narrow wooden jetty that protruded a few yards from the shore. Above the beach stood three corrugated iron shacks. Beyond these stretched the inhospitable waste of Pategonia in Argentina. The sandy brown earth and the rocks were broken only by a few stunted trees and patches of scrub.

The possessions of the 24 families less than 100 animals, a few pieces furniture and ironbound trunks were ferried ashore in the steamer's two lifeboats. The women and children joined the men who had preceded them in a huddle in the lee of the largest of the tree shacks.

As the animals were tethered in a hastily-constructed kraal just above the beach rain started to fall. This was followed by hail.

Commandant "Stoffel" Myburg, leader of the new Boer colony in Argentina, led the group as they knelt in prayer. The siren of the High-land King hooted a mournful farewell as she headed out to sea.

After an event-filled voyage of more than three months, the colonists had arrived in a new promised land.

"We were completely alone and as night began to fall, a strong bitterly cold wind blew up from the Antarctic. I remember my mother weeping and bemoaning the fact that we had ever left South Africa," Mr. Johannes Cornelis Venter (Oom Jan), who was 13 at the time, told me.

"Those were terrible days. Each family had been given a large bag of meal and £1 by the Argentine authorities, but apart from that we had almost nothing. We were poor - very poor," Oom Jan continued.

"The wind blew for days -spitting dust and sand Into our faces as we trekked inland to the farms which were to be our new homes."

"Within a week of landing it began to snow and when we reached our farms we built snow-houses in which to shelter. All we had to eat was the meal, ostriches and guanaco (a small type of llama) when we managed to shoot them.

"It was a terrible winter. There has only been one to equal it in all the years we have been here. Several Boers died and many were ill."

"But we survived and were established and able to give help when the other groups of settlers came in 1905 and 1907."

Today, the iron shacks and the deserted beach have given way to a breakwater, harbor and jetties behind which sprawls the town of Commodoro Rivadavia with its 50,000 population. Oil rigs line the shore and stretch out into the waters of the Gulf of San Jorge. 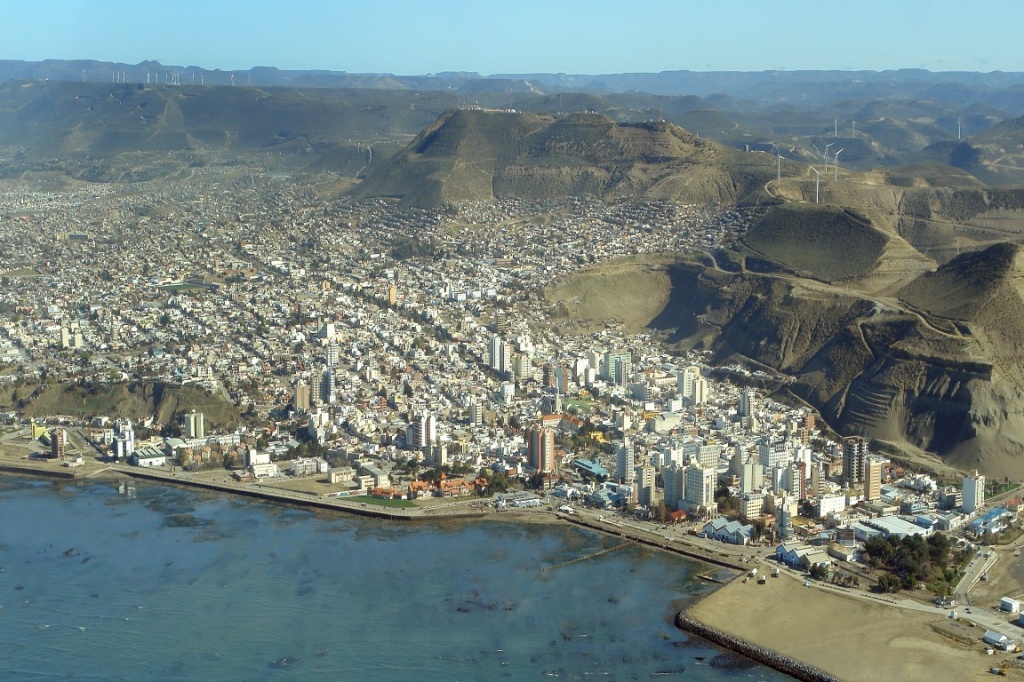 The descendants of those first settlers own some of the finest sheep farms in Argentina and form the largest Afrikaans-speaking community outside South Africa.

At the foot of the hill where the settlers spent their first night and which for many years was the uitspanplek" of the farmers, stands a white-painted Dutch Reformed Church. On the crest of the same hill is a small school where the grand children and great-grandchildren of the settlers are taught Afrikaans. In the tiny town of Sarmiento, 120 miles inland, more Afrikaans than Spanish is heard in the shops, bars and offices.

If you know more about the Boere of Pategonia please email me.

Click here for another visit to the Argentinian South Africans written by Vera Beljakova who Spent Christmas among the Patagonian Boers in 1978 and recorded the stories of the Old-Timers: